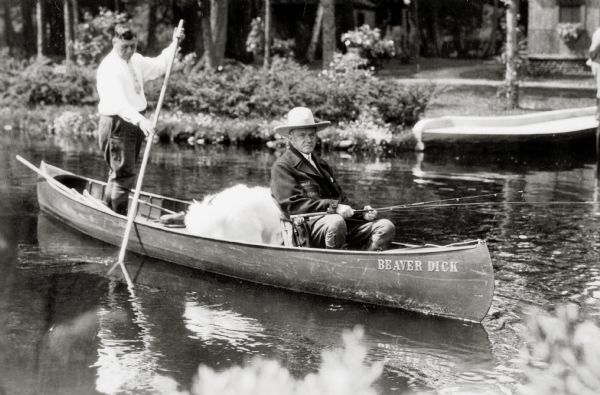 Coolidge fishing on the Brule. No idea what that big wad of white fluff behind him is – cotton candy? Wisconsin Historical Society

In fact, Wisconsin has been a popular destination for fishing presidents. Since Ulysses S. Grant, five presidents have dropped a line in the state’s waters.

Ill health led Coolidge and his wife Grace to leave Washington for Cedar Island Lodge in Brule. The announcement sent residents into a panic as they prepared for their lofty visitors. They built a new railroad depot, strung telephone and telegraph lines, redid roads and constructed an airport. A makeshift Oval Office was set up inside Superior Central High School for the nation’s business. The whole city decked itself out in red, white and blue. And upon his arrival, a huge crowd turned up to greet Coolidge, embarrassing the man known as “Silent Cal.” 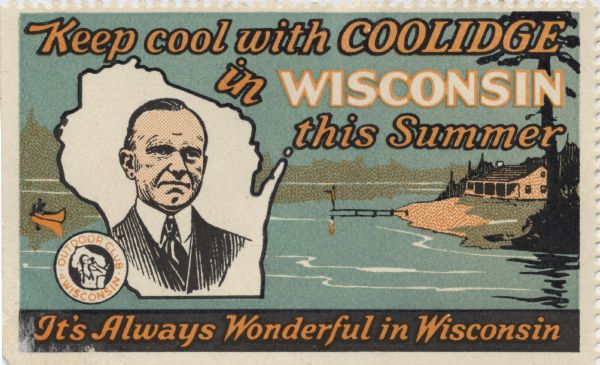 Coolidge appears to have spent most of his time fishing rather than politicking. In July, he welcomed presidential nominee Herbert Hoover and declared his support of Hoover’s bid for office to residents, visitors, and newsmen. But that was about it. The Duluth Herald reported that the president appeared “more anxious to master the paddling of a canoe against the Brule rapids than in learning what is going on.” Coolidge definitely kept his cool… if being cool meant his demeanor toward his job.

Coolidge left his summer White House able to fly fish and paddle a birch bark canoe. He hoped to come back to the Brule, but sadly, died before that came to pass.