After spending several years researching alternative healing methods for my new book, I was surprised to only recently learn the story of chiropractor Clarence Gonstead. Even more so because I’ve driven by the modernist Gonstead clinic in Mt. Horeb, Wisconsin, countless times.

Born in South Dakota in 1898, Gonstead grew up on a dairy farm in Primrose, Wisconsin, with an interest in automotive and tractor repair. Stricken with rheumatoid arthritis at 19, the bedridden Gonstead had exhausted nearly all of his medical options when he sought the services of a Madison chiropractor. The treatment worked. Gonstead was soon up and walking. This life changing experience led Gonstead to devote his life to chiropractic – a not uncommon conversion story in the annals of alternative medicine. 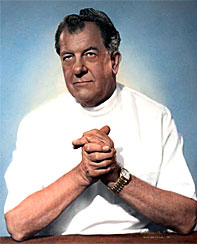 To save money for school, Gonstead worked as an automotive engineer. In 1923, he graduated from the Palmer School of Chiropractic in Davenport, Iowa (the Palmers had founded chiropractic in the 1890s), and a few years later, set up his own practice in Mt. Horeb.

Gonstead didn’t stick with the Palmer’s original theory. Rather than a vertebral bone causing nerve pressure (and thus disease) as founder D.D. Palmer and his son B.J. believed, Gonstead suggested that the vertebral disc caused nerve pressure. He developed his own method of spinal assessment to locate the spinal impingement, known as a subluxation in chiropractic.

“The principles of the Gonstead Method are the simple principles of chiropractic put to work; how to understand what causes nerve pressure, how to find it on the patient, how to achieve a corrective setting of the offending vertebra, and how to know when the chiropractor’s job is done, and nature’s begins,” explained Gonstead.

Neither D.D. nor B.J. Palmer took kindly to the ideas of others, even other chiropractors, so Gonstead likely received a chilly response to his technique.

Patients, on the other hand, loved Gonstead’s methods and they came from all over the country seeking his care. His clinic, a midcentury modern structure designed by Wisconsin architect John Steinmann, was one of the largest in the world with seating for 106 patients, a lab and research facilities, and seminar rooms. He even built a hotel, the Karakhal Inn, in 1965 to accommodate patients from out of town and other chiropractors seeking to learn his method. Business was so good that a regular limousine service traveled between the Madison airport and the Mt. Horeb clinic. Patients with their own private planes could land at Gonstead’s personal airstrip on the outskirts of town. For many years, the clinic was the largest chiropractic clinic in the world.

Gonstead also had a rather notable home. Herb Fritz, Jr., an apprentice of Frank Lloyd Wright, designed the private home on 55 acres in the late 1940s or early 50s. Unfortunately, the home burned down in 1992.

Gonstead died in 1978 and a nonprofit foundation now runs his clinic. His method has spawned followers and practitioners around the world.