On the night of October 14, 1912, Theodore Roosevelt spoke to a crowd in Milwaukee despite having been shot by a would-be assassin.

Milwaukee was a campaign stop for Roosevelt who was running for president as the candidate of the newly independent Progressive Party. Roosevelt had already served two terms as president but his unhappiness with his successor, William Taft, led him to seek office on a progressive platform. 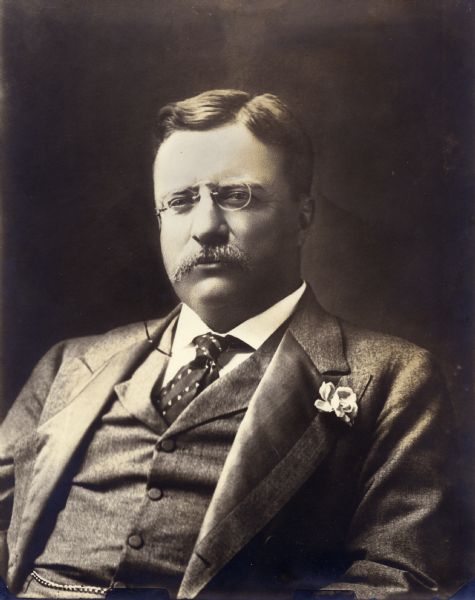 Unbeknownst to Roosevelt, New York bartender John Schrank had been stalking him for three weeks and across eight states. Obsessed with the thought of a third Roosevelt term, breaking the two term precedent set by George Washington, Schrank was convinced that Roosevelt’s election would lead to civil war so he decided he had to act. Schrank finally managed to get off a shot from his .38-caliber revolver as Roosevelt departed the Hotel Gilpatrick for his speaking engagement at the Milwaukee Auditorium. Unwilling to miss his speech, Roosevelt trivialized the wound and insisted on speaking. He even opened his vest at one point, revealing the wound, and declared, “It takes more than one bullet to kill a Bull Moose.”

Fortunately, Roosevelt had poor vision and was long-winded. The metal case for his glasses and the thick folded pages of his speech absorbed much of the force of the bullet lodged in the right side of his chest.

Following his speech, Roosevelt was rushed to the hospital. An X-ray confirmed the presence of the bullet in his chest but doctors decided to leave the bullet in place as it posed no threat to his organs and surgery could be risky. Roosevelt carried the bullet for the rest of his life.

Footnote – I realized only recently that the site of the shooting was on Old World 3rd Street near Kilbourn Avenue, the current home of the Hyatt, where I have stayed several times. I hear there are even photos and a plaque! I should be more observant.