[I recently appeared on the Wisconsin Public Radio show “Central Time” to talk about the history of beards and the current urban lumberjack fashion. Here’s a taste of what we talked about.]

Joseph Palmer became a martyr to his own whiskers, a long flowing beard that he insisted on wearing long in contravention of the current style. One day in 1830, Palmer was attacked by four men outside a hotel in Fitchburg, Massachusetts. His crime? Wearing a beard. 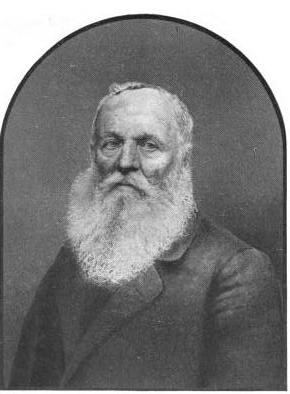 Palmer fought back, and despite being a large man, he was thrown to the ground. He managed to escape only by stabbing two of his assailants in the leg with his knife. He was later arrested and fined for causing an unprovoked assault. Although Palmer could easily have paid the fine, he refused on principle and went to jail for his facial hair crime. Even jail couldn’t protect Palmer from those who wanted to unshorn him – twice other prisoners and jailers attempted to shave his face. Palmer wrote letters from jail publicizing the case, and he was eventually released. His tombstone features a man wearing a long beard and the words “Persecuted for wearing the beard.”

A transcendentalist, reformer, and utopian, Palmer’s beard marked him as immoral and suspicious, clearly an outsider. Beards, mustaches, and goatees had been out in the United States since at least the 18th century. During the Enlightenment, a clean face signaled a mind that was open to new ideas. The nation’s founding fathers wore no beards – think of Thomas Jefferson, John Adams, James Madison, and George Washington. In fact, no president from Washington through James Buchanan had facial hair.

During the American Revolution, soldiers were expected to keep themselves clean shaven, though judging by the number of times orders to do so appear in wartime records and letters, the men were not listening.

Views on facial hair began to change by the mid-19th century, though. As the nation became more urban and industrialized, many Americans worried about what all of these transformations would do to men and women’s characters, their essential natures. Not to mention the fact that women were gaining more of a public role. Beards were one way men could clearly demonstrate their difference from women. By the Civil War, beards signaled virility, strength, independence, and masculinity. Look only at photos from the Civil War to see a whole range of mutton chops, mustaches, and wooly beards (Smithsonian had a great feature on the facial hair of the Civil War). All the winningest generals had facial hair: Grant, Lee, Sherman, Jackson.

And look to the Oval Office where the first bearded president, Abraham Lincoln, took office in 1861. Lincoln, it should be noted, did not have a beard during the majority of his campaign. He supposedly grew one in the weeks before the election at the suggestion of 11-year-old Grace Bedell who suggested he might look better with a little hair on his face. By the time of his inauguration, Lincoln’s famous bearded face had taken form.

Beards remained popular for the next several decades but the winds of fashion changed course again by the 20th century. Beards gave way to mustaches in the early 20th century and finally the clean shaven face reappeared. No president has had facial hair since William Howard Taft.

One thought on “Fashions on the Face: Beards in American History”