Toads for colds? It sounds like a joke. Or a witch’s brew. But in the mid-19th century, Madison doctor Hugh Greeley recommended a powder of toads for fever. “Take toads as many as you will, alive, [and] put them in an earthen pot,” he instructed. The toads were then set over an open flame. Once sufficiently cooked, they were cooled and then ground to a dark powder, mixed with a liquid – hopefully something strong and alcoholic – and drunk. For prevention, “half a dram will suffice,” counseled the good Dr. Greeley.

Winter in Wisconsin means snow, ice, and frigid temperatures. But it’s also the peak of the cold and flu season. The case was just the same more than a century ago, though the remedies were a little different.

George Howard, the first pharmacist in La Crosse, mixed many of his own special medicinal blends in the 1850s. He had remedies for everything from runny noses and headaches to something far more exciting: love potions. The lovelorn sent Howard letters begging for help. In return, he sent them powders to match a popular 19th century nursery rhyme. Women got “sugar and spice” and all that’s nice, while men got “snips and snails” (no one is quite sure what “snips” mean, though, the original line may have been “snips of snails” with “snips” meaning a little bit). Howard claimed to have received nothing but grateful “thank yous” in return.

A few decades later, Fond du Lac resident Wyman Towns began selling bottles of his special Cold Killer to cold sufferers through the mail. It wasn’t his only offering. He also sold Towns’ Healing Snuff and Towns’ Rheumatic Liniment among other patent medicines. The ingredients of these remedies were kept secret – that’s what made them patent medicines – so we don’t know if Towns shared Dr. Greeley’s affection for powdered toads. 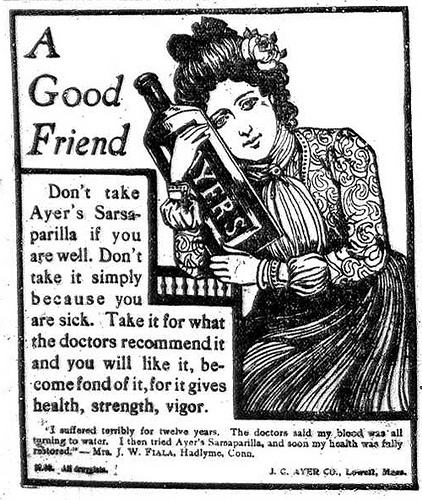 In the early 20th century, reporter Marcelia Neff remarked in the pages of the Milwaukee Journal that traditional Indian remedies could be very effective in curing what she called “neurotic white people.” Most of these remedies were made of native plants ground into powders or pastes or drunk as tea. A poultice of sumac leaves could relieve a sore throat: as could a mixture of bloodroot juice and maple syrup. Headache relief came with a tincture of aster leaves. The boiled bark of red maple did wonders for sore, red eyes.

Botanical cures had a long history in American medicine. European colonists relied on herbal remedies. They cultivated local plants for their healing powers often with the help of Native Americans. So important was the need for medicinal plants that the British crown ordered the 17th century Virginia colony to cultivate gardens of native plants for relief of coughs, colds, and worse.

And if none of those worked, there was always alcohol. Appleton resident Alfred Galpin recalled that his grandfather kept a healthy supply of brandy in his settler’s cabin in case of colds. While the alcohol surely didn’t cure, it could certainly dull or at least distract from sinus pain and pressure.

Sure, many of these remedies may seem ridiculous to us today, but the answer to the common cold still alludes us. So if you get a cold this winter, just know you have lots of company, both in the past and today.