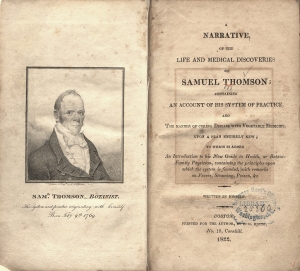 American physician Samuel Thomson was a big fan of apples. The founder of his own 19th century medical system, a method of natural, botanic remedies known as Thomsonianism, Thomson prescribed apples for stomach aches and advised mixing emetics with cider for those who needed a little something sweet to help the medicine go down. His medical journal, the Thomsonian Recorder, included articles on planting and tending apple orchards. For cholera, though, apples should be avoided at all costs warned Thomson.

Apples have long played a role in medicine. Even when people wouldn’t eat the raw fruit, they were more than willing rub some apple pulp on their skin or to swallow a tincture containing apples. Apples were prescribed for disturbances of the bowels, lungs, and nervous systems in 12th century Italy. In the 14th century, apple cures often called for apples cooked with sugar and spice, a kind of medical apple pie. Seventeenth century English doctors advised cider for depression, though it may have been the alcohol rather than the healing power of apples that did the cheering.

Thomson likely championed apples because they were natural, not to mention easily accessible to most Americans. Nearly everyone had an orchard in the yard. They also had a long history in medicine. Thomson’s ideas of the healing power of plants and herbs weren’t necessarily new – but he managed to capitalize them so successfully as to present the first serious challenge to regular medicine in the 19th century.