Amelia Bloomer is a name that many people who study women’s history even a little bit tend to know. She’s the namesake of “bloomers,” a style of dress that became popular among women’s rights advocates and dress reformers in the 19th century. Bloomer, the woman, didn’t invent the costume, but she was an early and ardent advocate of them and as a result, gave her name to the style. Bloomers consisted of a loosely fitting coat or dress that reached below the knees and a pair of billowing pants similar to Turkish trousers (picture MC Hammer or the Disney-fied Aladdin) gathered at the ankles. 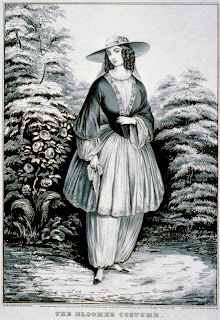 Although widely associated with women’s rights, bloomers were actually one of the treatment outfits for those taking a water cure. Hydropathy, as the water-cure system, was known was a popular form of medical therapy in the United States from the 1820s to the 1860s. The basic idea was that cold water was pure and clean and could therefore cure just about any disease. People “took” water in any number of ways but the most common was a wet sheet that would be wrapped around a patient for several hours until he or she sweated. An alternative to the sheet was a wet dress, which was introduced at a hydropathic institute and later became the model of the bloomer costume. Women who took the water cure often sometimes cut their hair short for easy drying and felt themselves free from the prevailing and restrictive women’s fashion.

The wet dress was introduced to the fashion world by Elizabeth Smith who displayed her fashion to women’s rights leader Elizabeth Cady Stanton. Amelia Bloomer discovered it when Stanton came for a visit and she soon began writing about it enthusiastically in her magazine, The Lily. Articles on the bloomer trend were soon picked up by other publications and it came to be dubbed “bloomers” for Bloomer’s advocacy of it for women. Bloomer herself along with other wearers of bloomers suffered merciless ridicule for their fashion choice.

The bloomers adoption by the women’s rights movement also damaged its reputation among hydropaths. Bloomers came to be associated with female radicalism and its followers were suspected of free love and of a desire to be free of all feminine graces.

Amelia Bloomer mostly abandoned the bloomer in 1859 but she continued to fight for women’s rights and for more sensible, less restrictive clothing for women for the rest of her life.

One thought on “Bloomers and the Water Cure”