We all have weaknesses and mine is for black cherry soda (I also love black cherry ice cream so there must be something about that flavor). Even after I’ve given up most other sodas, I’ll still happily crack a bottle of black cherry* whenever the opportunity arises. I have standards, though; it has to be in a glass bottle, preferably from a regional manufacturer. Even chemically-flavored water has a taste of place, doesn’t it? Even if that taste of place is just the tastes of the people in that place. 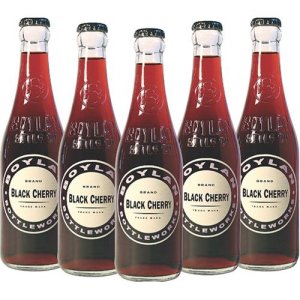 Years ago, my dad and I created a ratings system for these sodas. It wasn’t confined to black cherry–we’d also buy bottles of Nehi Peach, Moxie, KaPow!, and others. But if black cherry was available and we hadn’t tried that particular variety before, that was the first choice. The empty bottles lined the shelves in the laundry room like trophies. The tops of the cabinets were lined with old beer cans, mementos of my dad’s previous tasting adventures. A few still had beer in them for reasons that were always unclear to me. Beer doesn’t get better with age, Dad. Especially if that beer is from the late 1960s as many of them were.

The ratings were taped to the inside of the pantry door. It was a check, check minus, or plus system. Some got a double plus. None were terrible, but some were definitely superior. One of the best was actually not in a bottle at all but on tap at The Pyramid Ale House in Seattle. Fresh, rich, and delicious, it almost makes me wish I still lived there.
One year, my dad bought the Jones Soda Thanksgiving pack. Filled with sodas tasting of green beans, mashed potatoes, and turkey gravy, it was disgusting and fascinating all at once. Turkey soda tasted just as horrible as you imagine (“meat,” even artificial meat flavor, doesn’t quite refresh like other flavors), though, the corn flavor was oddly delicious.

The ratings system is still on, even though I’ve moved thousands of miles away. I’ve also branched out to other things, keeping lists of beers, whiskeys, bourbons, and tequilas with my husband. We don’t keep the empty bottles and cans like my dad, but the legacy of lists and tastings lives on.


* Black cherry is an actual fruit, even if it is most commonly seen in artificial products. It’s native to North America and is also known as the wild cherry or wild rum cherry. Straight off the tree, the fruit is often inedible and bitter, which is why it most commonly appears in a highly sugared form.