I love Susan B. Anthony. And Elizabeth Cady Stanton…even though I’m probably not supposed to. As a women’s historian, the heroes of women’s suffrage are no longer the heroes of the professional study of women’s history. Studying suffrage is old, something the field has supposedly moved past–or at least that’s how it certainly felt when I was a graduate student. And while it certainly makes some sense as we try not to focus on “great white woman history” as we had for so long with men…it still makes loving Susan B. feel a little illicit. 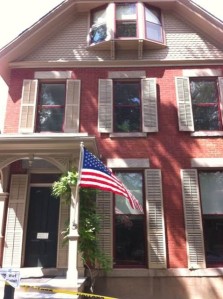 Last week, I visited Susan B. Anthony’s house in Rochester, New York, (fittingly, on the 90th anniversary of the Susan B. Anthony amendment, the 19th) and the week before, Seneca Falls. Both were wonderful, though, I was disappointed that we couldn’t go inside the restored church where the first Women’s Rights Convention was held. Even so, both were magical places. The Seneca Falls convention often gets relegated to a historical footnote when it was, in fact, a truly revolutionary event–for the first time in history, women publicly gathered to proclaim their rights. As a woman–as a person–, I don’t think you can help but be moved by that idea, though, I also think the true enormity of that call to arms at that time is hard to grasp. Women were basically invisible before the law, unable to own property of any kind, vote, to call for a divorce, or even have a say over the fate of their children in case of divorce; only the wealthy were educated. So to say that women had rights was truly shocking and revolutionary for 1848. By the way, historian Gerda Lerner has an excellent essay on the importance of Seneca Falls to women in her book Living With History, Making Social Change.


I’m not sure you can visit Susan B. Anthony’s house and fail to be impressed by her determination. She lived and breathed women’s rights–and I’m so thankful to her.