Resolutions to be healthy and fit are among the most common this time of year. Only two days in to the new year, we’re all still winning our resolutions (good news!). In honor of my soon to be released book Marketplace of the Marvelous: The Strange Origins of Modern Medicine, here are some 19th century tips for living healthy and well:

1. Drink water, the colder the better. Nature’s purest drink was the health beverage of choice for hydropaths, who promoted the benefits of regular bathing, soaking, and imbibing at least eight (and often a lot more – one guy claimed 30 glasses before breakfast!) glasses of cold water a day to wash out disease.

2. Think positive. Phineas Parkhurst Quimby believed that the cause of all disease was wrong thoughts. Replacing bad thoughts with good thoughts led to happiness and health.

3. Go natural. Samuel Thomson was a self-taught American herbalist who believed that nature knew best. He devised his own system of healing known as Thomsonism that relied on remedies made from the plants growing out your backdoor.

4. Move. Outside, if possible. Between drinking water and bathing, hydropathic patients went on long walks in the woods. The fresh air, trees, and other plants made for particularly restorative forms of exercise. On rainy days, patients juggled, danced, or chopped wood – anything to move more.

5. Avoid alcohol, tobacco, and other spirituous substances. Homeopaths believed that certain foods and drinks inhibited healing. The movement’s founder, Samuel Hahnemann, even cautioned against drinking coffee, claiming it could lead to impotence, sterility, and mental and physical “degeneration.” But even Hahnemann couldn’t deny its pleasures, particularly in the morning: “In the first moments or quarters of an hour after waking, everyone who is not living completely in a rude state of nature, has a disagreeable feeling of not thoroughly awakened consciousness, of confusion, of laziness, and want of pliancy in the limbs,” Hahnemann wrote. Coffee “removes this disagreeable situation” and makes drinkers “completely alive” with each sip.

My new book is only days away from its release into the world (January 7th!). It’s about health and sickness and how Americans throughout the 19th century struggled and embraced a variety of ways to be well before we knew about things like germs. They even got a few things right.

My husband lifted two boxes inside the front door when he came from work on Friday. “Something for you,” he said. My mom had warned that she’d sent presents and not to open them so I paid little attention to the boxes and left them sitting by the door. Until the next morning when I happened to glance at the return address, fully expecting to see my mom’s name but instead saw: Beacon.

The official publication date isn’t until January 7 but here’s some visual proof that this thing is real. At this time last year, I was tearing my hair out finishing the draft, rewriting, deleting, questioning everything, undoing that previous deletion, writing, deleting, repeat. Repeat.

This year is much better.

Is the brain the hottest organ in the body? That’s the argument made in a recent Slate story “The End of Neuro-Nonsense” that argues that brain hype reached its peak in 2008 and is now on the decline for a variety of reasons. Quoting from the new book Brainwashed that details the perils of brain-centrism: “Naïve media, slick neuroentrepreneurs, and even an occasional overzealous neuroscientist exaggerate the capacity of scans to reveal the contents of our minds, exalt brain physiology as inherently the most valuable level of explanation for understanding behavior, and rush to apply underdeveloped, if dazzling, science for commercial and forensic use.”

But I’d argue that we’ve been living a “neurocentric,” to quote the term used in the article for our brain obsession, world for nearly 200 years. We just had a different name for it in the past: phrenology.

Phrenologists posited that the brain was made up of individual organs with specific functions and attributes. The size and shape of these organs, as read on the skull, revealed our character. Many argued that these organs – and thus our personalities – were changeable, improvable. With a little exercise, we could make ourselves better by strengthening positive traits and weakening others. With phrenology, doctors could easily determine not only how but why someone thought, felt, and coped with life in a particular way. It provided comfort and insight into our seemingly unknowable depths, a way to understand behavior and personality with seemingly scientific precision. Who wouldn’t like that?

Like the 19th century, many of us hope today, as the phrenologists did, that mapping the brain will reveal the secrets of our natures. And once known, this information will allow us to manipulate and transform ourselves into something better. We just call it “neuro” this and “neuro” that now, from neuromarketing to neuroeconomics, a transmutation of language strikingly similar to what occurred in the 19th century as phrenological terms (high brow, low brow, shrink, well rounded) passed from the lab to daily conversation. Colorful fMRI images of the brain on TV encourage us to think of almost everything through its effect on the brain, the modern equivalent of the phrenological charts that adorned the walls of pharmacies and general stores and were featured in the pages of magazines and books. Just as in the past, popular neuroscience suggests that the way to make us smarter, happier, and even more beautiful is through concentrated efforts to improve the brain regardless of how little we actually know about how the brain works. It seems to me that popular brain science is the phrenology of the 21st century, and we’re just as ravenous for that knowledge today as they were in the 19th century.

So maybe 2008 marks the most recent crest of a brain obsession with more than two centuries of history behind it that seems bound and determined to rise again.

Let me tell you about a wonderful place.

I spent the month of May abroad, touring – much of it on foot – in Ireland, Wales, and England. One of my best mornings was spent in London at the free museum and library of the Wellcome Trust (my history dorky-ness reigns unimpeded through work AND vacation times). I first discovered it online while doing research for my next book on the history of 19th century alternative health. The center is an amazing resource for understanding the history of medicine and science, and the connections between medicine, life, and art. Intriguing, right?

Even better for my little Wisconsin history heart, the foundation for the library came from the collections of Wisconsin-born pharmaceutical salesman Henry Solomon Wellcome (1853-1936). Wellcome ran a successful pharmaceutical business in London but devoted much of his time and resources to collecting books and objects related to medicine, health, alchemy, and even witchcraft from around the world.

Prosthetic body parts have been used since at least the time of the Greeks and probably earlier (the Greeks left what is likely the first recorded use). None of these are quite that old but can you imagine wearing one of these? Near these limbs was a box of glass eyes. 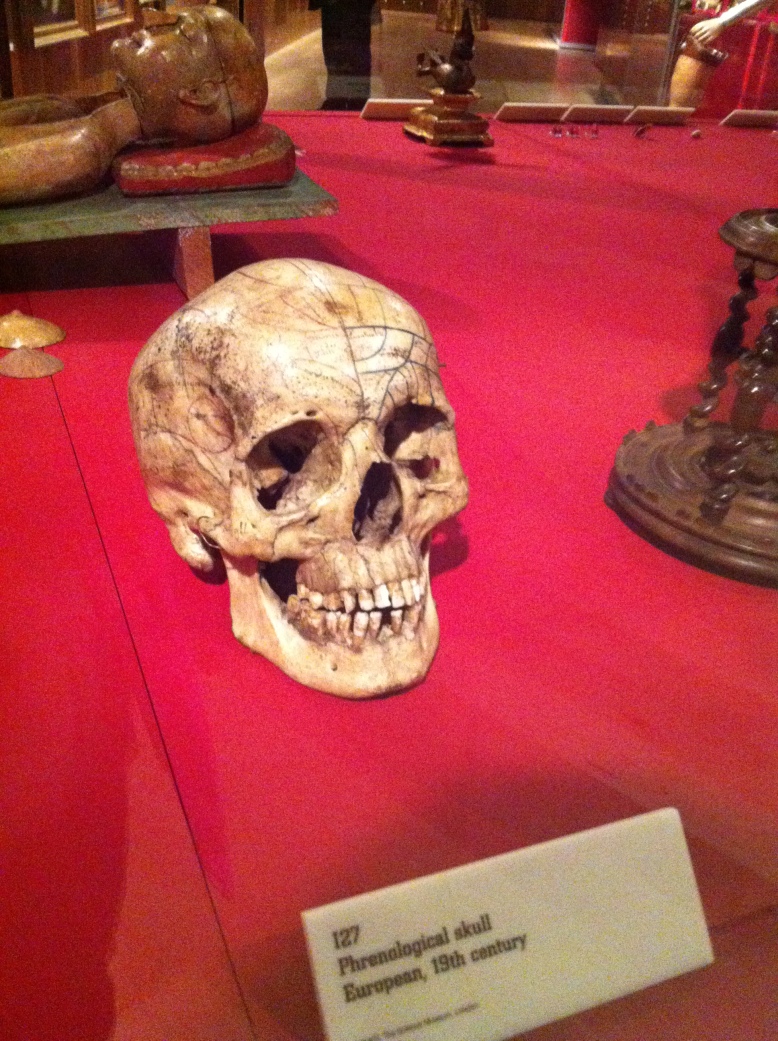 In the late 18th and 19th centuries, phrenologists argued that the shape and size of various parts of the brain – these parts were known as organs – determined your personality. Your skull was supposedly a “faithful” cast of the brain encased within so rather than perform some risky operation to take a look at your brain, phrenologists could simply feel and measure the bumps on your head. Phrenology was very controversial in the medical community – and even among phrenologists themselves as this skull demonstrates. One half shows the organs as described by phrenology’s founder, Franz Joseph Gall, while the other half shows those of Gall’s disciple Johann Spurzheim.

It’s still a ways off – pub date is January 7 – but seeing it in the Beacon catalog makes it more real! 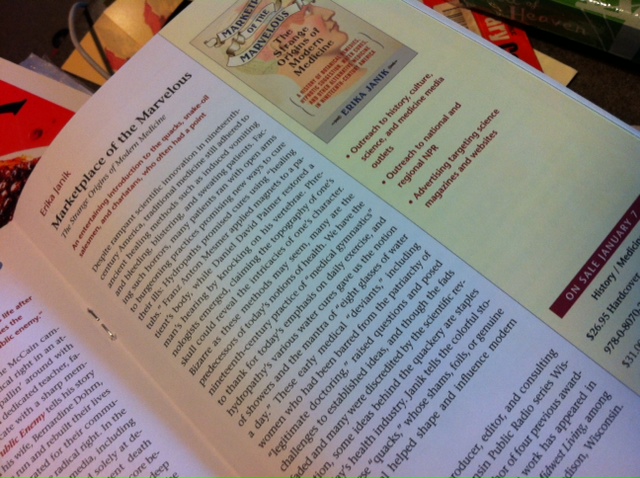 Everything you wanted to know about what we now call alternative but what was known in the 19th century as “irregular” medicine. It’s not quite as irregular as you might think!