It was the summer of the ice bucket challenge. Dumping icy water (or just ice. Or just ice to make a stiff drink) on your head to raise awareness for ALS while challenging others to follow suit.

One hundred and fifty years ago, people poured ice cold water on their head or bathed in it as a medical treatment itself. Hydropathy, or the water cure, promoted the benefits of pure cold water to good health. Many people took the cure at any number of water cures that opened around the country in the 1840s and 1850s. Most cures were located in beautiful spots alongside streams, lakes, or beside mountains. But the best time to come wasn’t summer but winter when the water was colder and the breezes strong and chilling. Water cures often advertised their winter amenities to people looking to be well.

Hydropathy’s founder Vincenz Priessnitz maintained that the water “cannot be at too low a temperature.” The “lower the temperature,” he claimed, “the more efficacious it will prove.” As a result, many water cures charged more in the winter than for a summer visit.

Unsurprisingly, winter brought its own hazards to those taking the cures. Icicles sometimes formed around the head of the outdoor shower, sending icy daggers along with cold water down on the head of the patient below. Outdoor bathers sometimes found themselves floating beside chunks of ice.

While critics of the water cure delighted in these tales of peril, patients loved it. Reformer and teacher Catharine Beecher declared hydropathy “the safest and surest methods of relieving debilitated constitutions and curing chronic ailments.”

Hydropathy, or the water cure, was hugely popular in the 19th century. And as such, people of all kinds – well meaning and otherwise – developed a panoply of devices and contraptions to help people wash out disease with cold, pure water.

The best might have been this one: the Niagara Wave and Rocking Bath 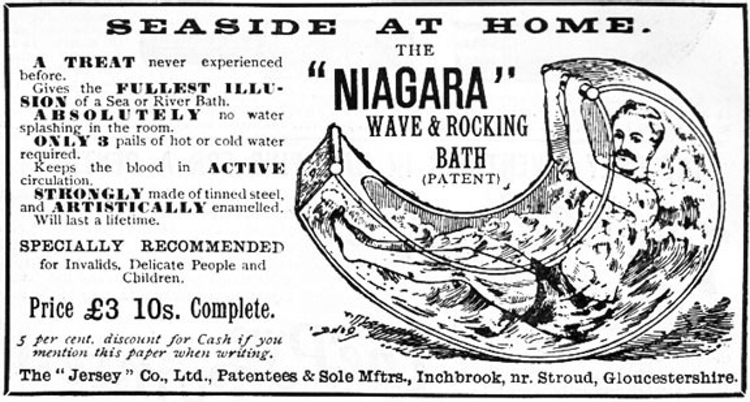 The bath, manufactured by the “Jersey” Co. (not sure about those parenthesis in the name – were they trying to hide something?),gave users the agitating sensation of the sea, an experience meant to replicate a visit to a real water cure where patients took all manner of baths, water wraps, and showers.

Visiting a water cure was expensive. A week’s stay could cost $10, which was more than the average American earning a$1 a day in the mid-19th century could afford. But water cure practitioners wanted to make sure their cure was affordable and accessible to all so they published reams of books and articles offering advice on home treatments. Any able bodied person could do it, they claimed. And judging by the letters in the main hydropathy magazine, the Water-Cure Journal, many people did and found relief.

The makers of the rocking bath hoped their product would help make home treatment even easier. It “will delight and benefit, especially invalids, delicate people and children” read one article. The back could even be wedged into an upright position to serve as a regular tub if no rocking was desired.

It was truly, as the ad copy reads, “A TREAT never experienced before.”

Nineteenth century singles hungered for love just as much as they do now. Personal ads – sometimes known as “lonely hearts” ads – flourished in Britain in the late 17th century when an entrepreneurial pamphleteer realized that love would likely sell just as any other commodity. American editors, too, seized on the possibilities of love, advertised.

Slate’s history blog Vault recently posted a selection of vegetarian personal ads from The Water-Cure Journal, the primary voice of the hydropathy, or water cure, movement, one of the most popular 19th century irregular healing systems. Hydropaths believed in the healing power of cold, pure water, and prescribed an intense regimen of bathing, showering, soaking, wrapping, and drinking (of water, of course) to heal disease. Patients received treatment either through a stay at a residential water cure or by following the instructions in any number of DIY water cure manuals.

Americans of all kinds were drawn to take the healing waters, though most were of a reforming bent. Hydropathy was often only one of a panoply of reforms and causes its followers championed. And they looked for the same in a mate.

Personal ads under the heading “Matrimony” appeared in many back pages of The Water-Cure Journal.

Jennie, a resident of the country, is twenty-four years of age, 5 feet 2 Inches in height, has dark hair and eyes, rather dark complexion. Is a thorough reformer, in every sense of the word ; detests tea and coffee, and will never marry a man who uses tobacco. Is a firm believer in Hydropathy, and practices as well as preaches it. (July 1855)

Jennie wasn’t alone in her distaste for stimulating hot beverages. Many followers of irregular healing, including hydropaths and homeopaths, believed that coffee and tea interfered with healing and in some cases, might even make you sicker.

Gertrude was quite the catch:

Am 28 years of age, neither handsome or a “singing angel;” but understand the music of the pudding-slice. Am in no hurry about marrying; but think I should like to find my partner as soon as 31. Am 5 feet 4 inches in height, and must be mated phrenologically and spiritually, or not at all. Should wish one who could do without tea, coffee, pork, beef, mutton, and feather-beds; a practical anti-slavery man, anti-tobacco, and I care not if anti-razor – in short, one who acts upon principle rather than policy. Age anywhere between my own and 40. (March 1855)

Phrenology’s appearance in Gertrude’s ad is far from surprising. The journal’s publisher, Fowler and Wells, were well known advocates and practitioners of phrenology and also published the main phrenological journal. Phrenology posited that character could be scientifically read on the bumps of your head. Brothers Orson and Lorenzo Fowler believed that the answers to nearly all life’s questions could be found in phrenology, from career paths to marriage prospects. Lorenzo had himself determined the suitability of his own wife Lydia Folger through an early courtship head reading.

Like Jennie, Gertrude, too, prefers a man who doesn’t drink tea or coffee, though I’m not sure what she has against feather-beds. It may suggest a type of luxury thought immoral to the pious reforming type.

She’s also willing to date a man with a beard – “I care not if anti-razor.” Beards had not yet reached the hairy, be-mutton-chopped heights of the Civil War. For much of early American history, a beard marked a man as an unconventional rebel or outsider. Though facial hair was generally unpopular, Gertrude was willing to look past it for love.

Announcing the 1850 birth of his daughter in the pages of the Water-Cure Journal, Thomas Nichols asserted that childbirth could be not only easy but nearly pain free for women. His declaration wasn’t the smug opinion of a man standing idly by while his wife labored for hours in the other room. His wife, in fact, fully agreed with him.

Mary Gove Nichols’s secret was hydropathy, a system of healing that relied on the power of cold, pure water to flush sickness from the body. Mary had suffered the agony of four successive stillbirths before submitting to its rigorous but healthful routine. Coming from anyone else, few Americans would likely believe their claim but Mary was one of the most influential and authoritative advocates of hydropathy in the nation. 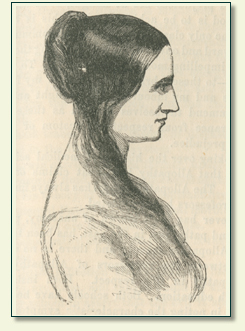 Largely self-taught, Mary first made a name for herself in 1838 lecturing — a scandal in and of itself for a woman — on the shocking topics of women’s health and anatomy. Women’s health was a topic rarely, if ever, discussed at the time. Standards of female propriety meant that many women endured their sicknesses in silence to avoid being examined by a man.

Mary made it her mission to educate women….

Read the rest of Mary’s story at Biographile