We all know that an “apple a day keeps the doctor away.” Apples are filled with healthy vitamins and fiber – the perfect healthy snack.

But this is a relatively new idea. For centuries, eating a raw apple was seen as a reason to call FOR a doctor. People throughout Europe and North America were suspicious of apples and raw fruit in general. In medieval Europe, apples were banned for children and wet nurses. An upset stomach or flu nearly always resulted in fingers pointing at the poor, humble apple. It didn’t help that many believed the apple the cause of Eve’s downfall in the Garden of Eden.

At the same time, apples found a welcome home in the medicine cabinet, prescribed for all manner of aches and pains. It’s funny that an apple could both cause disease and cure it.

Part of the unease with apples had to do with the apples that many people were eating. The Romans had cultivated extensive orchards and seemed to know everything there was to know about apples. But when Rome fell, that knowledge mostly disappeared (or in many cases, went behind monastery walls where monks practiced orcharding techniques aiming for self-sufficiency), leaving people with the often bitter wild apples. They tasted so bad that many people came to believe that apples were poisonous. Fruits sold in villages and city markets were often unripe, overripe, or contaminated so apples weren’t all that appealing.

Apples were wildly popular in alcoholic form, however. Cider was the drink of choice in England, France, Spain, and the United States. The Temperance movement in the 19th century ruined cider’s reputation and by extension, that of the apple as well.

In an effort to rehabilitate the apple’s image, the apple industry began marketing apples as healthy foods for actual eating and not just drinking. Missouri fruit specialist J.T. Stinson coined the phrase “an apple a day keeps the doctor away” at the 1904 St. Louis World’s Fair, an association apples have benefitted from ever since.

Sickness was a major part of early American life. Many people suffered from poor health their whole lives.

But scientifically valid medical knowledge was limited. The world in 1820 was not a much more comfortable place to fall ill than it had been two hundred years earlier. No one knew about germs or the significance of human contact or insects in spreading disease.

Medical theory of the time held that sickness resulted from a body out of balance. It was an idea that went back hundreds of years to Roman physician Galen in the 2nd century. To restore balance, mainstream doctors bled, blistered, and sweated patients to large and often painful degrees. They administered large doses of drugs like calomel, a form of mercury, to purge patients. Doctors chose treatments that caused quick and drastic changes in a patient’s condition, which could be interpreted as progress. Though well-intentioned, these mainstream treatments also caused as much, if not more, pain than the sickness itself. As a result, doctors could rarely offer sick Americans a medical means of getting better.

But as industrialization, urbanization, and new technologies remade everything from where people worked to how they lived and got around in the 19th century, many Americans began to question why medical care didn’t seem to be improving, too. Anyone who could offer a remedy that seemed effective, didn’t hurt as much as bleeding, cost less than a trip to a doctor, and even allowed you to treat yourself was bound to be popular. (Even a cursory study of the past reveals that Americans have been staunchly independent and looking for deals for centuries.)

And so, phrenologists read character on the topography of people’s skulls, hydropaths attempted to wash out all disease with cold water, and mesmerists transmitted an invisible fluid known as animal magnetism. And millions of Americans became devotees.

But why would anyone believe these things could work? 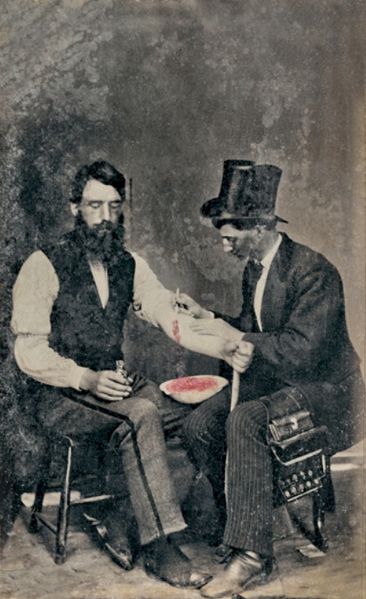 Read the rest on The Beacon Broadside.