“When I was just a maiden fair,

Mama made our underwear;

With many kids and Dad’s poor pay,

We had no fancy lingerie.

Did not adorn our Sunday britches;…

No lace or ruffles to enhance

Just “Jockey Oats” on my pants.

One pair of Panties beat them all,

For it had a scene I still recall –

Right across my little seat.

Rougher than a grizzly bear

Was my flour-sack underwear…

All through Depression each Jill and Jack

Worse the sturdy garb of the sack…

There were curtains and tea towels too,

And that is just to name a few.

But the best beyond compare

Was my flour-sack underwear.”

This poem, an anonymous ode to flour sack underwear from the 1930s, likely expressed the thoughts of many who wore feed sack fashion. Feed and flour sack fashion predated the Depression years, however.

In the 1850s, improvements in sewing machine design and a thriving and growing cotton market, helped by the widespread commercial use of the cotton gin, made cotton bags cheap and easy to produce. Wooden barrels, boxes, and bins, the stuff of transport for centuries, were pushed aside in favor of tightly stitched bags. Flour, sugar, animal feed, and fertilizer were among the products to be shipped in bags.

To the surprise of the companies, these bags proved nearly as valuable as the feed they contained.

Rural families often had limited resources for reasons of finances and distance from markets. Forced to be thrifty, farm families took advantage of an essentially free source of fabric to make clothes. The cotton bags came with the names and logos of the companies and women figured out ways to remove the ink to make the fabric useable for dresses, towels, curtains, quilts, and other goods. It was no easy task – some soaked he bags in kerosene and others rubbed them with lard – but women were resourceful. Free from logos, the bags were dyed, embroidered, and trimmed.

An instruction manual for sewing with cotton bags (Kindness Blog)

It took some time but by the 1920s, the flour and feed industry began to capitalize on the popularity of the bags. To make it easier for sewing, companies developed easy to remove labels. Others provided instructions on how to remove the labels. Then, they came up with printed patterns, bright colors, and printed pattern and embroidery lines. Gingham Girl flour, for instance, was marketed in red and white checked fabric of a dressmaking quality as early as 1925. Some companies even hired artists to design prints. Recycling flour sacks into clothing and household items had become a fad.

The introduction of printed fabric bags expanded the market for feed and flour from male farmers to farmers and their wives. Women were now more involved in the selection of feed. Feed and flour companies hoped that these innovations would cause women to instruct their husbands to purchase particular brands and additional bags so they could complete an outfit or pattern.

Fad turned to necessity during the Depression and continued into World War II with fabric shortages and rationing. Fortunately for farm wives, feed sacks fell in the industrial rather than retail category during the war so clothing fabric could still be found in feed stores at the same time that readymade clothing became scarce.

Demand for cotton bags declined after World War II as packaging switched to paper, the new more cost-effective way to transport goods. Producers of cotton bags tried to keep their market share by intensifying their focus on farm wives. They hired top designers to create modern prints, and organized traveling fashion shows of clothes made from bags.

But the flour sacks’ days were numbered. Production declined in the late 1950s, replaced by cheaper plastic and paper.

“It’s up to you to keep the home fires burning, to see that you and your family stay easy-on-the-eyes. Fortunately, you can be patriotic and pretty both. It’s easy to teach an old wardrobe new tricks, to resurrect the skeletons in your closet and bring them up to date. Come on, take those old knockabouts and turn them into knockouts, keep that glint in Uncle Sam’s eye and still do your stint towards Victory!”

That’s how the Spool Cotton Company enticed American women to sew during World War II. Everyone was asked to do his or her part for the war. Children saved pennies and collected scrap metal. Families planted vegetable gardens. Women learned to cook meals without meat, wheat, and sugar. Other women went to work in factories and farm fields. They also picked up a needle and thread. 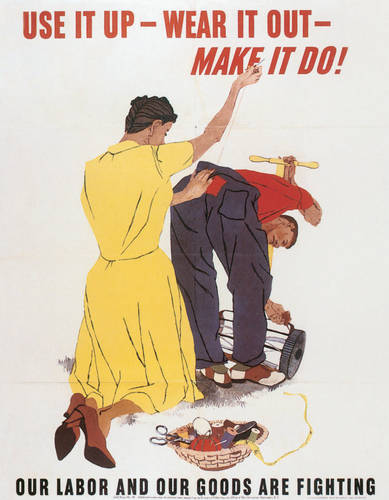 Sewing had fallen by the wayside for many Americans with the growth of ready-made clothes in the 1920s. A whole generation of young people grew up thinking that they maybe didn’t have to sew anymore.

But during World War II, sewing became patriotic and women were urged to mend old clothes or make new ones. In 1942, the War Production Board issued regulation L-85 rationing natural fibers. Domestic supplies of wool, cotton, linen, rayon, silk, and nylon were needed for military uniforms and supplies. The government need for fabric grew so great that it depleted supplies of clothes and shoes.

To save on fabric, the War Production Board even regulated style, limiting fabric color choices and restricting the length of skirts and the fullness of pants. Cuffs were forbidden. Dresses were limited to one and ¾ yards of fabric.

As a result, women’s hems rose, pants legs narrowed, and jackets fell at the hip. Women stopped wearing silk stockings (which cost too much, while the new wonder fiber nylon was commandeered soon after its launch for parachutes, airplanes, netting, and tents) and began painting seams on their legs to give the appearance of wearing stockings. Men adopted single-breasted suits without pleats or cuffs. Some men struggled to even find a suit as the clothing industry focused on military needs. 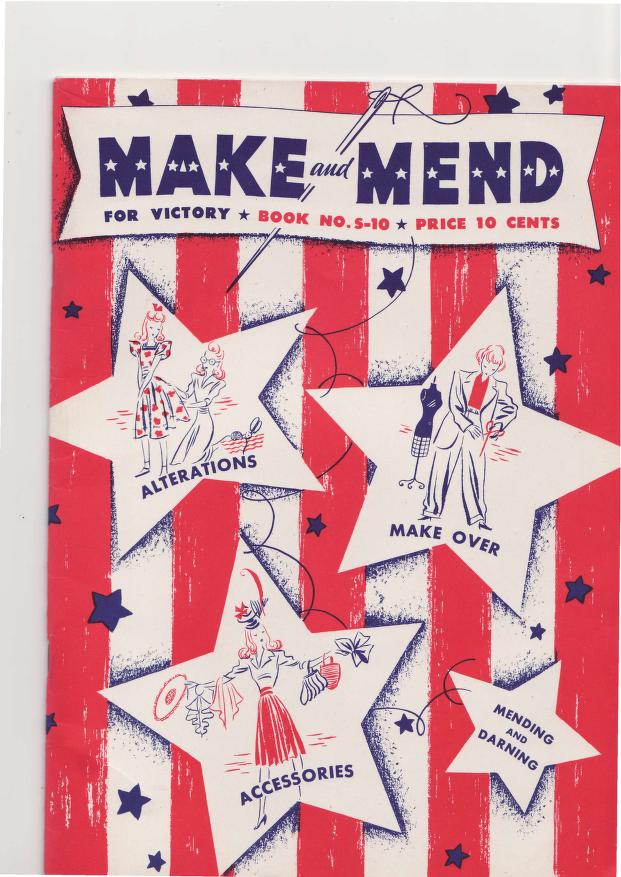 And Americans began to mend their old clothes – “make do and mend” as the effort was known in Britain. “You’ve no idea how quickly wilted wardrobes respond to kindness,” counseled Make Mend for Victory. The booklet advised women on easy repairs for holes in stockings, fixing tears, and patching holes. Not oblivious to trends, it also covered alterations and restyling, the addition of collars and dickeys, and smart hats made from “a ball of yarn” and “a scrap of felt.”

Sewing for victory created a sewing boom but it didn’t last. While fabric shortages in Europe kept women sewing longer, many American women put aside their machines once the war ended.