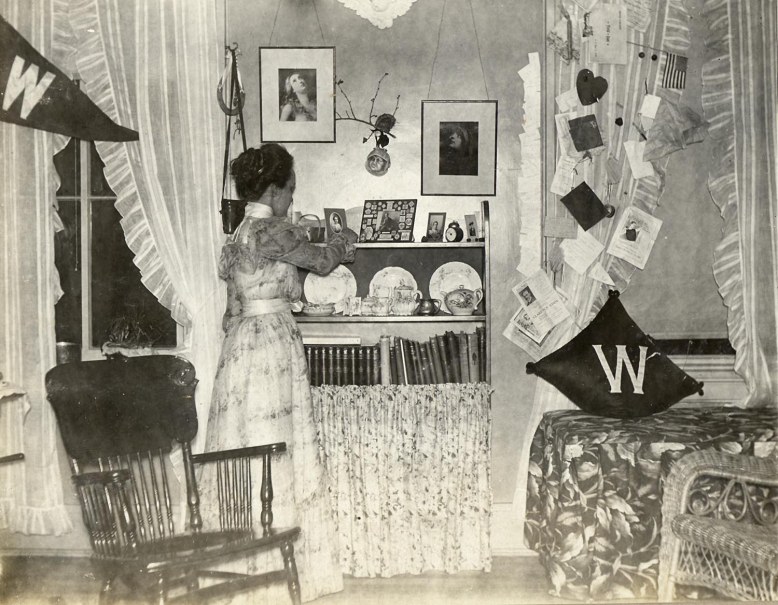 Though students may not bring their tea sets to college anymore — as Lelia Bascom did in the above image of her room in the old Chadbourne Hall at the University of Wisconsin in 1899 — the college experience has long been associated with dorm life.

For centuries, universities were built around massive libraries. Early dorms were imposing structures designed to separate students from the outside — noneducational, vice-ridden — world. The male students that traditionally occupied these rooms were subject to strict rules and routines, often enforced by dorm mothers.

Male students took up residency in the University of Wisconsin’s North Hall in 1851. Among the hall’s most famous residents in its early years was John Muir, who decorated his 1860s dorm room with some of his inventions designed to maximize his college experience. One was a combination bed/alarm clock that tipped him onto the floor at an appointed hour each morning and struck a match to light up the room. Another was a rotating desk that lifted his textbook from a stack, opened it to the proper page, and left it there for a preset time before replacing it with the next book.

A second dorm, South Hall, opened in 1855, and became the first female residence hall in 1863 when the first women were admitted to the UW. The student above, Lelia Bascom, benefited from the actions of her distant cousin, former UW President John Bascom, the man primarily responsible for giving women full coeducational status at the UW in 1863. It was a move steadfastly opposed by one of Bascom’s predecessors Paul Chadbourne, who later, in a most fitting bit of historical humor and revenge, became the namesake for the building housing female students. When the original Chadbourne Hall was demolished in 1957, it was the oldest women’s dorm in the United States.

See more photos of dorm life — and its evolution — in this wonderful gallery from the University of Wisconsin-Madison Archives.

John Muir, one of America’s most influential naturalists and champions of the wilderness, celebrates his birthday this week.

Born on April 21, 1838, in Dunbar, Scotland, Muir and his family landed in Wisconsin in 1849. They settled near Portage on land they called Fountain Lake Farm. It was there in the woods, prairies, and wetlands of the farm that Muir discovered his passion for nature.

As a young man, Muir was also a talented inventor and could have made quite a career for his mechanical devices. On the farm, he constructed water wheels, thermometers, clocks and an automatic horse feeder. His father disapproved of his tinkering so he spent his nights working in secret in a cellar workshop.

Muir, whose formal schooling ended when he moved to Wisconsin, craved education. So he took several of his inventions to the 1860 Wisconsin State Fair and scraped up enough attention and money to pay for his college tuition.

Muir made the combination desk and clock pictured above while he was a student at the University of Wisconsin in the 1860s. More than just keeping time, it was a study aid for the harried college student. He arranged his books in the order he needed to study and set the timer. After a click, the first book was pushed up from a rack below the top of the desk and thrown open for studying. After a set number of minutes, the machinery closed the book, dropped it back into the rack, and then moved the next book up and onto the top of the desk.

Muir filled his dorm room with these practical machines to maximize his college experience. Another of his inventions was a combination bed and alarm clock that tipped the bed up and the person sleeping in it to standing position and struck a match for the lamp at the appointed wake up hour. It was carved, as a former dormmate of Muir’s recalled, with “no other tool than a jackknife.”

Muir left the UW and Wisconsin in 1863 on what he called “a glorious botanical and geological excursion.” He didn’t consider his education done, however: “I was only leaving one university for another, the University of Wisconsin for the University of the Wilderness.”