Electricity has long been a popular healer. In the 18th century, upper class people in the United States and Europe attended dramatic electrical performances as entertainment. The therapeutic uses of electricity were not just for the elite, however, extending all the way down to the lower classes.

Ancient Romans knew of the healing power of electricity. They prescribed the application of black torpedo fish, a kind of electric ray, to numb pain. Scribonius Largus, Emperor Claudius’ physician, was a staunch advocate of the remedy: “To immediately remove and permanently cure a headache, however long-lasting and intolerable, a live black torpedo is put on the place which is in pain, until the pain ceases and the part grows numb.”

The discovery of the Leyden jar – a way of storing up static electricity – in the 18th century allowed shocks to be delivered in a more forceful way. Soon after, Italian physician and scientist Luigi Galvani’s experiments activating the nerves in the legs of a dead frog seemed to suggest that electricity and life were intimately connected. If electricity restored life, suddenly, toothaches, back pain, headaches – just about any ailment seemed like it could be cured by the application of electricity. It ignited an electrical healing craze.

Mary Shelley used this belief in electricity to her advantage in 1817, giving birth to Frankenstein.

Electrotherapies were common in the 19th century. All sorts of electric devices – electric baths, electric belts, electric vests, electric soap, even electric hair brushes – could be purchased along with wild claims to health improvement.

Electric belts were particularly popular in the late 19th and early 20th centuries. Ads featured all manner of testimonials from satisfied customers. You didn’t even have to seek a specialist to get one –  they could be purchased from the Sears catalog. The Reinhardt brothers of Milwaukee were big proponents of electrical healing, selling their devices as cures for every kind of sexual dysfunction imaginable.

I spotted these electrical belts in the collections at House on the Rock.

Of course, electrical therapy still exists to this day. Transcutaneous Electrical Nerve Stimulation, or TENS, for instance, uses a low-voltage electrical current for pain relief, not unlike the torpedo fish of Roman times. Electricity may not be a cure-all but it’s definitely still with us.

It was the summer of the ice bucket challenge. Dumping icy water (or just ice. Or just ice to make a stiff drink) on your head to raise awareness for ALS while challenging others to follow suit.

One hundred and fifty years ago, people poured ice cold water on their head or bathed in it as a medical treatment itself. Hydropathy, or the water cure, promoted the benefits of pure cold water to good health. Many people took the cure at any number of water cures that opened around the country in the 1840s and 1850s. Most cures were located in beautiful spots alongside streams, lakes, or beside mountains. But the best time to come wasn’t summer but winter when the water was colder and the breezes strong and chilling. Water cures often advertised their winter amenities to people looking to be well.

Hydropathy’s founder Vincenz Priessnitz maintained that the water “cannot be at too low a temperature.” The “lower the temperature,” he claimed, “the more efficacious it will prove.” As a result, many water cures charged more in the winter than for a summer visit.

Unsurprisingly, winter brought its own hazards to those taking the cures. Icicles sometimes formed around the head of the outdoor shower, sending icy daggers along with cold water down on the head of the patient below. Outdoor bathers sometimes found themselves floating beside chunks of ice.

While critics of the water cure delighted in these tales of peril, patients loved it. Reformer and teacher Catharine Beecher declared hydropathy “the safest and surest methods of relieving debilitated constitutions and curing chronic ailments.”

We all know that an “apple a day keeps the doctor away.” Apples are filled with healthy vitamins and fiber – the perfect healthy snack.

But this is a relatively new idea. For centuries, eating a raw apple was seen as a reason to call FOR a doctor. People throughout Europe and North America were suspicious of apples and raw fruit in general. In medieval Europe, apples were banned for children and wet nurses. An upset stomach or flu nearly always resulted in fingers pointing at the poor, humble apple. It didn’t help that many believed the apple the cause of Eve’s downfall in the Garden of Eden.

At the same time, apples found a welcome home in the medicine cabinet, prescribed for all manner of aches and pains. It’s funny that an apple could both cause disease and cure it.

Part of the unease with apples had to do with the apples that many people were eating. The Romans had cultivated extensive orchards and seemed to know everything there was to know about apples. But when Rome fell, that knowledge mostly disappeared (or in many cases, went behind monastery walls where monks practiced orcharding techniques aiming for self-sufficiency), leaving people with the often bitter wild apples. They tasted so bad that many people came to believe that apples were poisonous. Fruits sold in villages and city markets were often unripe, overripe, or contaminated so apples weren’t all that appealing.

Apples were wildly popular in alcoholic form, however. Cider was the drink of choice in England, France, Spain, and the United States. The Temperance movement in the 19th century ruined cider’s reputation and by extension, that of the apple as well.

In an effort to rehabilitate the apple’s image, the apple industry began marketing apples as healthy foods for actual eating and not just drinking. Missouri fruit specialist J.T. Stinson coined the phrase “an apple a day keeps the doctor away” at the 1904 St. Louis World’s Fair, an association apples have benefitted from ever since.

Hydropathy, or the water cure, was hugely popular in the 19th century. And as such, people of all kinds – well meaning and otherwise – developed a panoply of devices and contraptions to help people wash out disease with cold, pure water.

The best might have been this one: the Niagara Wave and Rocking Bath

The bath, manufactured by the “Jersey” Co. (not sure about those parenthesis in the name – were they trying to hide something?),gave users the agitating sensation of the sea, an experience meant to replicate a visit to a real water cure where patients took all manner of baths, water wraps, and showers.

Visiting a water cure was expensive. A week’s stay could cost $10, which was more than the average American earning a$1 a day in the mid-19th century could afford. But water cure practitioners wanted to make sure their cure was affordable and accessible to all so they published reams of books and articles offering advice on home treatments. Any able bodied person could do it, they claimed. And judging by the letters in the main hydropathy magazine, the Water-Cure Journal, many people did and found relief.

The makers of the rocking bath hoped their product would help make home treatment even easier. It “will delight and benefit, especially invalids, delicate people and children” read one article. The back could even be wedged into an upright position to serve as a regular tub if no rocking was desired.

It was truly, as the ad copy reads, “A TREAT never experienced before.”

Announcing the 1850 birth of his daughter in the pages of the Water-Cure Journal, Thomas Nichols asserted that childbirth could be not only easy but nearly pain free for women. His declaration wasn’t the smug opinion of a man standing idly by while his wife labored for hours in the other room. His wife, in fact, fully agreed with him.

Mary Gove Nichols’s secret was hydropathy, a system of healing that relied on the power of cold, pure water to flush sickness from the body. Mary had suffered the agony of four successive stillbirths before submitting to its rigorous but healthful routine. Coming from anyone else, few Americans would likely believe their claim but Mary was one of the most influential and authoritative advocates of hydropathy in the nation.

Largely self-taught, Mary first made a name for herself in 1838 lecturing — a scandal in and of itself for a woman — on the shocking topics of women’s health and anatomy. Women’s health was a topic rarely, if ever, discussed at the time. Standards of female propriety meant that many women endured their sicknesses in silence to avoid being examined by a man.

Mary made it her mission to educate women….

Read the rest of Mary’s story at Biographile

Resolutions to be healthy and fit are among the most common this time of year. Only two days in to the new year, we’re all still winning our resolutions (good news!). In honor of my soon to be released book Marketplace of the Marvelous: The Strange Origins of Modern Medicine, here are some 19th century tips for living healthy and well:

1. Drink water, the colder the better. Nature’s purest drink was the health beverage of choice for hydropaths, who promoted the benefits of regular bathing, soaking, and imbibing at least eight (and often a lot more – one guy claimed 30 glasses before breakfast!) glasses of cold water a day to wash out disease.

2. Think positive. Phineas Parkhurst Quimby believed that the cause of all disease was wrong thoughts. Replacing bad thoughts with good thoughts led to happiness and health.

3. Go natural. Samuel Thomson was a self-taught American herbalist who believed that nature knew best. He devised his own system of healing known as Thomsonism that relied on remedies made from the plants growing out your backdoor.

4. Move. Outside, if possible. Between drinking water and bathing, hydropathic patients went on long walks in the woods. The fresh air, trees, and other plants made for particularly restorative forms of exercise. On rainy days, patients juggled, danced, or chopped wood – anything to move more.

5. Avoid alcohol, tobacco, and other spirituous substances. Homeopaths believed that certain foods and drinks inhibited healing. The movement’s founder, Samuel Hahnemann, even cautioned against drinking coffee, claiming it could lead to impotence, sterility, and mental and physical “degeneration.” But even Hahnemann couldn’t deny its pleasures, particularly in the morning: “In the first moments or quarters of an hour after waking, everyone who is not living completely in a rude state of nature, has a disagreeable feeling of not thoroughly awakened consciousness, of confusion, of laziness, and want of pliancy in the limbs,” Hahnemann wrote. Coffee “removes this disagreeable situation” and makes drinkers “completely alive” with each sip. 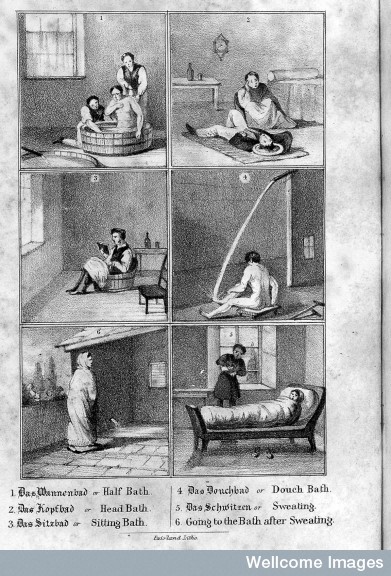 My new book is only days away from its release into the world (January 7th!). It’s about health and sickness and how Americans throughout the 19th century struggled and embraced a variety of ways to be well before we knew about things like germs. They even got a few things right.